Port of Ness, Isle of Lewis
A ***Hornemann's Arctic Redpoll*** was seen in a sycamore tree by 9 Port of Ness and then flew off. [See news from Tony Marr below]

Miavaig, Isle of Lewis
A Fieldfare was seen there today

Loch Sandary, North Uist
2 Black-tailed Godwits and a Coot were there today

Langass, North Uist
A Chiffchaff and Yellow-browed Warbler were seen there today plus 32 Whooper Swans and 250 Pink-footed Geese were seen flying over

Lochmaddy, North Uist
A Yellow-browed Warbler was there today

Ardnamonie, South Uist
A Ring Ouzel was there this morning.

The Range, South Uist
2 **White-rumped Sandpipers** were around the flooded area at Launch Area 2 this evening

News from Tristan:-
A juvenile American Golden Plover was at Loch Ordais this morning but flew off calling after a couple of minutes and I didn't see it again.
Attached record shot is truly awful
Also 15 Barnacle Geese (my first of the autumn) flew SW past Labost, as did 2 Long-tailed Ducks and a Bonxie. A Gadwall, a Chiffchaff and 3 Redwings were at Loch Ordais, and a Willow Warbler in Bragar village. 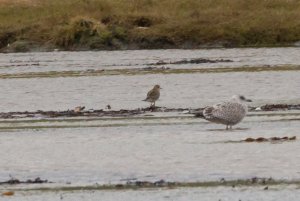 A big fall of Redwings on Barra today with a thousand or more weary looking birds around the island. 40 or so Barnacle Geese were at Borve and 15 Pink-footed Geese flew south past Allasdale. The Ring-necked Duck was on Loch Tangasdale and the Subalpine Warbler was trapped and ringed at Nasg. The tail pattern of this bird indicates that it's not an Eastern Subalpine. DNA analysis will no doubt prove which of the other two options it is! 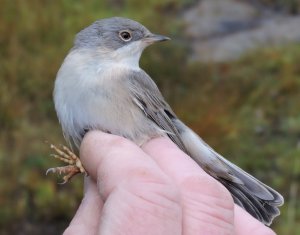 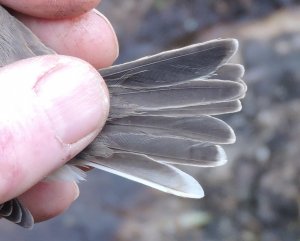 This afternoon I found a Hornemann’s Arctic Redpoll in the sycamore trees beside the house in which I am staying, 9 Port of Ness. It showed well for a mere few minutes before flying off towards the village gardens, but despite being in the area for the next three hours, I could not find it again. I was unable to obtain any photos. The wind up here yesterday reached storm force from the south-west in the morning, with frequent torrential downpours throughout the day.
Likes: John Hansford
You must log in or register to reply here.
Share: Facebook Twitter Reddit Pinterest Tumblr WhatsApp Email Link