A Song Thrush was singing in the garden at Carinish, North Uist this morning. Also two Robins have been singing regularly together sometimes only a few metres apart. As Robins solitary and strongly territorial possibly ♂ and ♀? 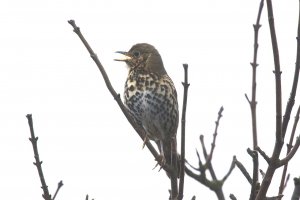 A Goldcrest was trying to sing at Northbay yesterday; the volume was low and some of the notes were a bit off, but good to hear it tuning up for the coming season. The parvipes type Canada Goose was still at Borve today along with a hundred or so Barnacles. The 4 Common Redpolls were still by the Co-op at Castlebay.

Early February WeBS counts today were much as expected especially with a White-tailed Eagle and a Peregrine keeping the birds on the move. On Loch Bee, Mute Swan numbered 314 with 14 Whoopers amongst them. There were 570 Wigeon, 150 Teal, 190 Mallard, 126 Tufted Duck, 8 Goldeneye and 2 pair of Scaup. Waders were hard to find with 59 Curlew, 6 Redshank, 1 Greenshank, 51 Golden Plover, 65 Oystercatchers and 246 Lapwing. The only Greenland White-fronts to be seen were a small group of 26 at Kilaulay.

Elsewhere there was 6 Coot and 4 Gadwall on Coot Loch and 6 male Shoveler were on Loch Fada. A Sparrowhawk was at Ardivachar Point and the 2 Little Egret were again at Stilligarry. 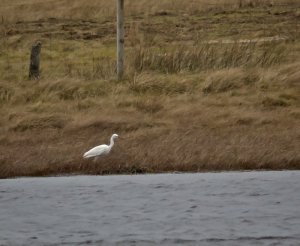 Tiumpan Head
A 2CY Glaucous Gull was seen in the afternoon