New Tolsta, Isle of Lewis
Late news of a 1W *Mediterreanean Gull* seen yesterday evening on pools to the west of Triagh Ghearadha

Sound of Taransay, Isle of Harris
The drake Surf Scoter was seen again in the sound this morning

Loch Sandray, North Uist
A Pectoral Sandpiper and circa 70 Black-tailed Godwits were there this morning 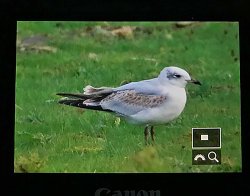 Very little was moving SW past Aird an Runair, North Uist this morning but I only watched for an hour (08.15-09.15). A bit more was moving N but no count and difficult from watching position among the rocks. Total cloud cover with pulses of rain, some blue sky later and a WSW wind F7-8. Species included a Brent Goose, a flock of 11 Pintail, 36 Gannets (one juvenile), two Great Northen Divers, and three Golden Plover. On the stubble on the headland were 72 Black-tailed Godwits and at least 70 Turnstone.

Another 19 Black-tailed Godwits were at Loch Sandary, North Uist later in the morning.
B

91 pale-bellied Brents were new in at Traigh Mhor, Barra today included 7 colour ringed birds. Nearby the 2nd winter Med Gull was still at Eoligarry along with a Black-tailed Godwit.

News from Tony Marr at Ness

Pinkfooted Geese - A steady arrival NW-SE during the afternoon totalled 1,230 over Ness and a further 250 over Stornoway.
Sooty Shearwater – 3 E-W off the Butt (am)
Eurasian Teal – 100+ on Loch Stiapabhat
Eurasian Wigeon – 9
Whimbrel – 1 at the Butt
Black-tailed Godwit – one on Loch Stiapabhat
You must log in or register to reply here.
Share: Facebook Twitter Reddit Pinterest Tumblr WhatsApp Email Link