Loch Sandary, North Uist
A female/juvenile *Ring-necked Duck* was seen there today
Note:- Location found to be reported incorrectly. Report refers to the bird on Loch a Bhrusta, Benbecula.

West Gerinish, South Uist
Three Little Stints are still to be found in the south-west corner of Loch Bee

Bornish, South Uist
A single Pectoral Sandpiper and 144 Black-tailed Godwits were still to be found on the machair this morning

Yet another of our Storm Petrels has turned up elsewhere, this time on the small island of Giske, Norway just 4 days after it was ringed here on South Uist on 25-July2021, a distance of 979km. By coincidence, this bird was processed just 2 hours after a bird that was also controlled (caught and released elsewhere) on the Faroes on 21-August-2021.

This takes us to 5 recoveries (birds ringed here & found elsewhere -red) and 6 controls (birds ringed elsewhere & caught here - green) this year – so far. Amazing birds, wieghing less than a House Sparrow, known to live for 35+ years spending most of that time at sea, just how many miles will they travel in a lifetime. 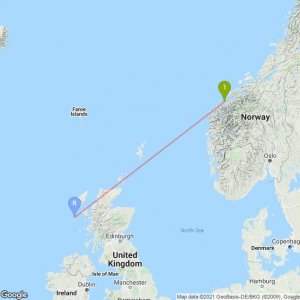 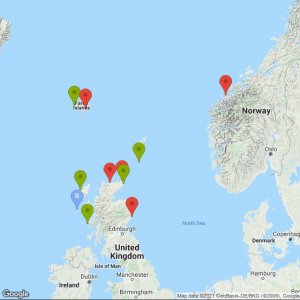 Barra.
Barred Warbler still at Nask along with a new Lesser Whitethroat and Spotted Flycatcher. Golden Plovers were on the move with a few high-flying flocks passing south over the island, others congregating on the machair north of the airport.