Tiumpan Head, Isle of Lewis
An adult and 2nd winter Glaucous Gull and a 2nd winter Iceland Gull were there this morning

The Braighe, Isle of Lewis
3 Black-throated Divers, 50+ Long-tailed Ducks and 2 Pintail were there early afternoon

Stornoway, Isle of lewis
A Turtle Dove has been visiting a garden there, first seen 3 days ago. 3 Bramblings are also visiting the feeders

Clachan, South Uist
The drake *Green-winged Teal* was again seen in the channel at the north end of Loch Bee this morning. A Pink-footed Goose was nearby at Balgarva

Coot Loch, Benbecula
The drake *Ring-necked Duck*, a drake Scaup and a pair of Pintail were on the loch today

Traigh Mhor, Barra,
The 3rd Winter Glaucous Gull was there again this afternoon 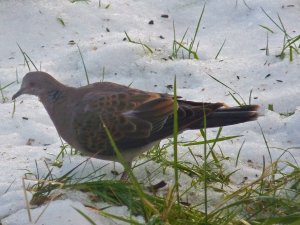 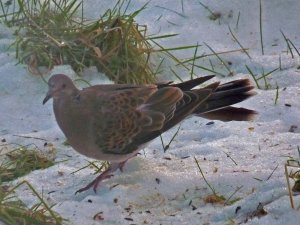 News from Tristan, Isle of lewis