As part of the BTO’s RAS project, colour ringed House Sparrows in Askernish, South Uist are scrutinised regularly and any unringed birds always attract attention. In this case, a bird was seen with only a metal ring on it’s left leg and therefore not ringed as part of the project. Over several days the ring number was field read and the bird was found to have been ringed at Creachan, Barra on October 2019. This is the second known bird in 3 years to make the same journey between Barra and South Uist (see map), a distance of 26km. Two other birds ringed at Askernish, South Uist have also made the reverse journey, one being seen at Brevig in 2017 and another in Vatersay Township in October this year.

Another bird to take the same route was a Goldcrest ringed at Brevig, Barra on 13-October-2019, and was later caught and released in Askernish on 29-November-2019.

A Lapwing chick ringed on Benbecula 0n 13-May-2008 was found dead below overhead electric cables 0n 22-October-2019 at Port Hall, Donegal, Ireland, a duration of 4179 days and a distance of 282 km. (see map)
Although this bird lived 11 years 6 months 9 days, it is still well short of the longevity record of 24 years 6 months.

A colour ringed Barnacle Goose seen recently at Loch Grogary, North Uist on 21-November-2019 and was originally ringed on a new breeding site at Breidamurker, Iceland on 18-July-2019 (see map). Last year there were some 200 sightings of colour ringed Barnacle Geese on the islands but hardly any made their way to the BTO or the County Recorder. 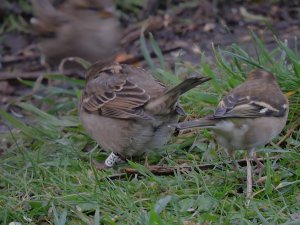