Balranald, North Uist
The drake Pintail was again on Loch a Roe

Loch Sandary, North Uist
A Coot was on the loch today

Baleshare, North Uist
A juvenile Glaucous Gull and 30 Snow Buntings were on the island.

A blustery day for the WeBS count on the Ardivachar coast with a large number of gulls, mainly herring and common, both on the shore and on the flooded machair. A group of 70 turnstones flighting between the rocks but no sign of the purple sandpipers.
North Bay was rather more sheltered and had the resident flock of bar-tailed godwits for the area (c650) and an outstanding count of c1000 sanderlings. We often have several hundred sanderlings on the Ardivachar side, so I asssume these have supplemented the North Bay population for more shelter.

WeBS was challenging again today with a stiff breeze and squally showers of sleet and hail but I wanted to get out as it was also International Swan Census weekend. I'll include a quick summary of observations of swans - thanks to all those who braved the weather and got out to look for swans.

Loch Bee was fairly quiet with Mute Swan numbers down to around 300 though Wigeon were in plentiful supply at c800 birds. 7 Scaup were bobbing wildly about out in the open water and I was pleased to see a total of 123 Greenland Whitefronts. I have noticed this winter where there used to be one large flock of whitefronts there now seems to be smaller groups spread throughout the site. Plenty of Greylags with probably c400 in the vicinity and 37 Barnacle Geese. Waders were few with Lapwing, Golden Plover, Turnstone and Redshank present. 2 Goldeneye and a single Long-tailed Duck were on the loch.

South Ford had good numbers of Grey Plover with 220+ out on the sands with c150 Dunlin there too. A lot of Shelduck in the area and I counted 52.

Thanks go to the many volunteer counters for the information. Your efforts, particularly in the current weather conditions are much appreciated!

Benbecula
Lewis
Great coverage considering there aren't too many of us here!

I've copied this swan survey information and posted in "Chatter" so that I can update it when I have more information, see https://www.outerhebridesbirds.org....onal-swan-census-2020-january-11th-12th.1530/ 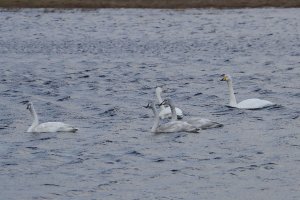