Hirta, St Kilda
The Rose-coloured Starling is still present in the village and a Lapland Bunting was seen up at Mullach Sgar.

Gallan Head, Isle of Lewis
A *Buff-breasted Sandpiper* was seen there today. A Sooty Shearwater also flew past the point

Mangersta, Isle of Lewis
2 Sooty Shearwaters flew past the point this morning

Ardivachar, South Uist
the juvenile Curlew Sandpiper is still to be found on the beach south of the point 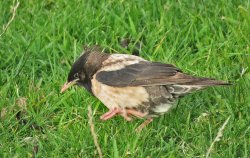 A change in seawatching venue from Aird an Runair this morning with a visit to Griminish Point, North Uist. With no access to vehicles to the track at Scolpaig means a walk of just under 2 km from the main road. Cloudy with a few showers and a couple of glimpses of the sun with a W-WSW wind F5-6.
In a 3 hour watch (07.55-10.55 hours) the following were recorded flying SW: a flock of 13 Teal, 60 Fulmars, 12 Sooty Shearwaters, 34 Manx Shearwaters, a Leach's Petrel, 60 Gannets (25 juveniles), 24 Red-throated Divers, a Great Northern Diver, single Arctic and Great Skuas, two Kittiwakes, two Arctic Terns (well out and went up high when briefly chased by a skua, and a Razorbill (also three auks not specifically identified).
Also present was a female Peregrine and some 350 Rock Doves vacated their roost at Sloc Roe.

A distant shot of the Great Northern Diver.

And of the Peregrine.
B

Yesterdays Lapland Bunting was still at Eoligarry today. Another was on the end of the headland at Aird a Chaolais, Vatersay when I began seawatching at 4 pm and a flock of 5 came in off the sea shortly after. The 2 hour seawatch produced 7 Leach's Petrels, 9 Sooty Shearwaters, c250 Manx Shearwaters, 3 Red-throated Divers and 3 Kittiwakes all going south. Nearby 15 White Wagtails were on the beach at Caolas this evening. 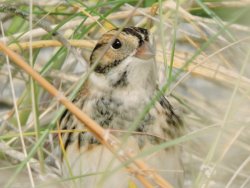 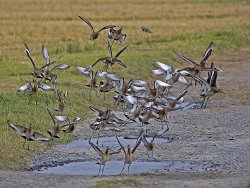