Paiblesgarry, North Uist
The 3 Dotterel are still to be found on the machair there

Garynahine, Isle of Lewis
A *Nightingale* was heard singing there last night

Barvas, isle of Lewis
7 Common Redpolls have been coming to feeders

Linsiader, Isle of Lewis
2 Redpolls have been present for three weeks and have recently been joined by a male Brambling. 3 Siskins have also been seen in the area. A Brambling is also visiting feeders at Callanish

Stinky Bay, Benbecula
An Iceland was there this afternoon

South Glendale, South Uist
5 Common Redpolls seen in a garden there
B

The lesser yellowlegs was still at Caolas, Vatersay this morning, though more elusive than previously.
B

Nothing to add to total of Pomarine Skuas at Aird an Runair today but the total of Long-tailed Skuas (up to 17.45 hours) was 17. These included two seen by Barry Barnacal around 16.00 hours that passed N inland between the headland and RSPB visitor centre and a flock of seven likewise at 16.40 hours (seen by Glyn Evans who had just arrived).

From Geoff Wyatt - five extra Long-tailed (two at 19.50 and 19.55 with a single at 20.25). Also seven more Pomarines (days total 29 and a small number of probables). Also today Geoff witnessed Arctic Skuas hunting in pairs and catching two Dunlin. This behaviour has only been occurring here relatively recently and there is a short note by Mark Darlaston and Adele Rennells in the 2005/2006 Outer Hebrides Bird Report.
Last edited: May 15, 2018
B

A late surprise this evening at Brevig, Barra when I glanced out of my window and noticed 5 tree sparrows in my front garden. 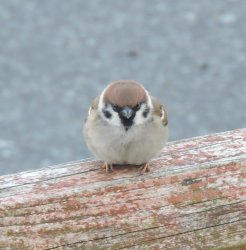 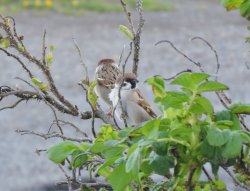