Ness, Isle of Lewis
7 Snow Buntings were in the Cross area today.

Stornoway, Isle of Lewis
8 Iceland Gulls (including 2 adults) and a Glaucous Gull were in the harbour area today

Borve, Berneray
The *Common Crane* was on again on the machair this afternoon

South Glendale, South Uist
A Mistle Thrush was singing singing there this morning. A Goldcrest and the male Siskin also in a garden there 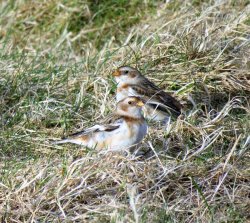 3 juveniles and a second winter Iceland gull were at Ardveenish this afternoon along with a juvenile and second winter glaucous gull and 2 lesser black-backs. There was also an immature great black-backed gull with a yellow darvic ring; unfortunately it flew before I had a chance to read the ring code. Hopefully I'll catch up with it again in the next day or two.
You must log in or register to reply here.
Share:
Facebook Twitter Reddit Pinterest Tumblr WhatsApp Email Share Link
Menu
Log in
Register
Install the app
Top