Kathy found an adult Rose-coloured Starling at Borve, Barra this afternoon. It was initially on the hillside above the campsite before moving out onto the machair near the cemetery in the company of about 200 Starlings. It could be the Vatersay bird moving north, or just as likely a new individual. Also today at least 1 Spotted Flycatcher still at Creachan. This year there are 5 Blackcap territories around the island; the first juveniles of the season were at Creachan. 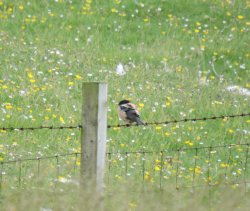 St Kilda
The female ***Snowy Owl*** was again seen on Hirta at Mullach Geal this morning. A Sooty Shearwater was also seen at offshore to the NE of Boreray

Tarbet, Isle of Harris
A Rose-coloured Starling was seen there today

Garynahine, Isle of Lewis
An Osprey was seen there this afternoon

Stinky Bay,Benbecula
A 2CY Iceland Gull was there this morning.