Reef, Isle of Lewis
A Little Egret was seen there this morning

Aileodair, North Uist
The drake *American Wigeon* was again on the loch

Coot Loch, Benbecula
The drake *Ring-necked Duck* and a pair of Pintail were still on the loch today

Cleit, Isle of Barra
An adult *White-billed Diver* was there today in quite rough seas.

As is our annual tradition @MisterT and I headed out at first light to spend the day birding and working on our 2019 Western Isles year list. We went as far south as Pollachar and as far north as Stoneybridge.

Over the course of the day we found 58 species - and improvement on the same date over the last three years.

Bird of the day was probably the Rook that was still at Kilpheder.
Other species seen included: a flock of 30 Twite on the Askernish machair, Goldeneye on Loch Hallan, a good selection of waders (Oystercatcher, Ringed Plover, Curlew, Lapwing, Golden Plover, Sanderling, Dunlin, Redshank, Turnstone, Bar-tailed Godwits) along the beaches. A Greenshank was found at Loch nan Ràmh, near Daliburgh. Hen Harrier, Peregrine, Merlin and Kestrel were birds of prey seen, there seemed to be quite a few Reed Buntings around in various places. A raft of c30 Long-tailed Duck were offshore at Frobost with similar numbers present further north at Kildonan. 2 Gannets were offshore near Orasay.

Will head out again tomorrow and hopefully venture further north. 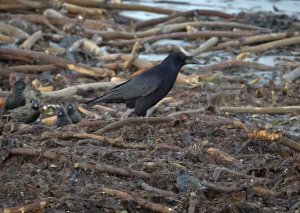