Kneep, Isle of Lewis
The four ***Blue-winged Teal*** were seen on Loch Sgallier this morning

Tolsta Chaolais, Isle of Lewis
A juvenile Rose-coloured Starling has been visiting a garden feeder since Saterday

Balgarva, South Uist
A ***Baird's Sandpiper*** was seen there today. A juvenile Curlew Sandpiper was also present as was a Little Stint

Loch Bee, South Uist
The Little Egret was at the north-west corner of Loch Bee. It later flew south 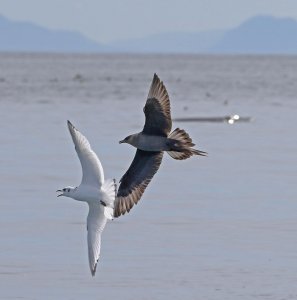 Arctic Skua (C) and courtesy of Nichola Hodgins
B