Barvas, Isle of Lewis
150+ Redwings were seen there today

Stornoway, Isle of Lewis
42 Waxwings were in a garden there and another 30+ were opposite the hospital entrance [see post below]

Castlebay, Barra
A *Red-breasted Flycatcher* and 2 Waxwings were seen there this morning [see @Bruce post below]

On Barra today, a Red-breasted Flycatcher, 2 Waxwings, 2 Blackcaps, 2 Bramblings and a Woodpigeon were by the football pitch at Castlebay. Another Waxwing and Woodpigeon along with 2 Chiffchaffs and a Blackcap were at Glen. The Yellow-browed Warbler was still at Creachan along with a Chiffchaff, 3 Blackcaps, 5 Bramblings and a Woodcock. The Pale-bellied Brent flock at Traigh Mhor increased to 43 and included a colour ringed bird. 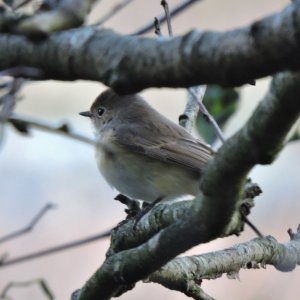 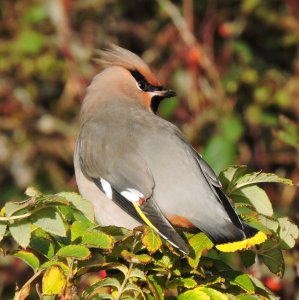 There were 20 Whooper Swans on Loch Ordais this morning and 6 Snow Buntings nearby on the headland at Labost.

A flock of 42 Waxwings was around my garden briefly at lunchtime. The biirds flew off in the direction of the hospital, and were presumably responsible for the reported count of 30+ from there 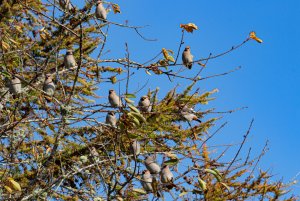 Wednesday 23 October
Whooper Swans – a build up through the day from 8 to 23 at Fivepenny Flood, and 40 on Loch Stiapavat; most had gone by this morning.
Redwings – 150 in two flocks (100 and 50) flew in off the sea by the lighthouse (am).
Snow Bunting – 5 near the lighthouse.