Borve, Isle of Lewis
A Lapland Bunting flew over this morning

Loch Ordais, Isle of Lewis
The juvenile Curlew Sandpiper was still there today

Gallan Head, Isle of Lewis
A Lapland Bunting was seen there today

Stornoway, Isle of Lewis
7 Great Skuas, 1 Arctic Skua and a Sooty Shearwater were seen offshore from the harbour

Eoligarry, Barra
A *Common Rosefinch* was seen there this morning [see Bruce's post below]
Five Sooty Shearwaters, four Great Skuas, eight Teal and 100s of Manx Shearwaters past Eoligarry in an hour this evening

A **Great Shearwater** later heading south at 19:27
An additional 32 Leach's Petrel's flew past the point between 14:40 and 20:07 with two killed and eaten by a Peregrine. 4 Storm Petrels, 7 Sooty Shearwaters, 302 Manx Shearwaters and 750+ Gannets also passed during that period. 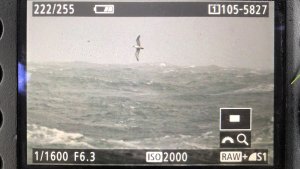 Great Shearwater, Rubha Ardvule. Courtesy of and ©Peter Stronach
B

Barra.
A juv Common Rosefinch was at Eoligarry first thing this morning, though apparently wasn't seen later. A Ruff was in nearby fields and the Pied Flycatcher remained at Ardmhor.
A 3 hour seawatch on the west side of Vatersay from 2pm produced a juv Sabine's Gull (2.30pm), 5 Leach's and 3 Storm Petrels, 1 Great Skua, I Red-throated Diver, 8 Sooty Shearwaters and c1800 Manx all going south. 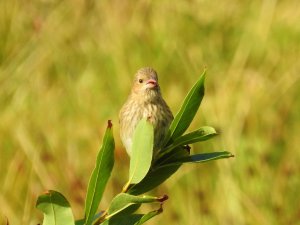