Still 3 white-rumped sandpipers (1st w plus 2 still pretty fresh juveniles) at Ardivachar. No sign of the lesser yellowlegs though.

1 brambling, and a woodcock in my garden. 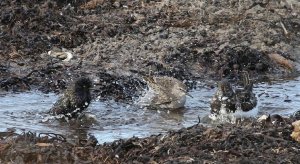 South Glendale, South Uist
2 Blackcaps were in a garden there

Morghan, Barra
The ***Brown Shrike*** was seen there again today
B

On Barra the Brown Shrike was still at Morghan showing from time to time. 6 Snow Buntings flew over the area and a Blackcap and 2 Siskins was also present. Single Waxwings were at Nasg and Creachan and another Siberian Chiffchaff was calling in the willows at Garrygall. The Ring-necked Duck was still on Loch Tangasdale. 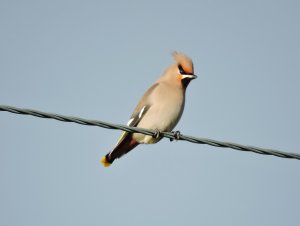 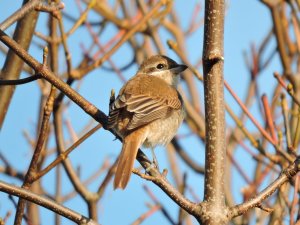 A few North Uist observations today. There was a Woodcock at Callernish while a ♂ Snow Bunting came from the W and landed briefly on offshore rocks at the headland. From the track on the W side of Ben Risary plantation a flock of eight Common Crossbills flew over calling. The juvenile American Golden Plover was still present at Balmartin but no prolonged views as the plover flock were very flighty. On returning home to Carinish Angus MacPhail, a neighbour, reported an injured bird. This turned out to be a Woodcock crouched down close to the house. Quite alert with no obvious injuries. On a number of occasions raised and fanned tail to show distinctive white tips to undersides. In BWP 'specialized structure of tips of tail-feathers allows either sex to attract attention in poor light by raising and fanning tail, when white markings on underside reflect light....but more probably employed in ground courtshipe and other display'. Behaviour today was probably a threat display with examples given as 'tail frequently arched and fanned over back when wounded bird approached by dog or man; also once seen performed towards observer by ♀ feeding 30 m from nest'.
S