Eoligarry, Isle of Barra
The ***Isabelline Shrike*** was again in the garden of Donscurravel House

Bornish, South Uist
The *Common Rosefinch* is still to be found in a garden there

Isle of Barra
Wood Warbler, Barred Warbler and Lesser Whitethroat still present on the island plus and small race of Canada Goose was at Allasdale [see Bruce's post below]

Sound of Taransay, Isle of Harris
2 drake Surf Scoters were there today along with circa 20 Slavonian Grebes, Long-tailed Duck, 10 Great Northern Divers and 1 Black-throated Diver. 5 Greenshank and 200+ Barnacle Geese were nearby.

Loch Roag Beag, Isle of Lewis
A Little Egret was seen on the Loch this morning

Baleshare, North Uist
Circa 800 Barnacle Geese flew south this morning. A further 1000+ were there this evening

North Uist: there was a large arrival of Barnacle Geese today: at Aird an Runair ca.1,500 came over in the late morning and at Carinish ca.1,000 came over from the NE around 17.00 hours. There was no sign of the Lesser Yellowlegs at Aird an Runair and during occasional looks out to sea a small number of divers flew SW (a single Red-throated, five Great Northern and four not identified). 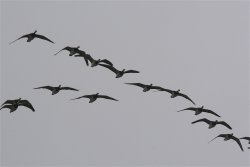 A Little Egret was present at the W end of Loch Grogary yesterday (David Henshilwood). Also entered in the book in the RSPB visitor centre as seen on the Reserve on September 28th.
B

Hard going on Barra again today but the rain did at least ground some birds. Several hundred Barnacle Geese were scattered around the island and a small flock at Borve contained a small Canada type, most probably parvipes, that moved across to Allasdale. Many of the Barnacle Geese headed off to the south once the rain stopped in the early evening. There were vast numbers of Snipe everywhere today; hard to know how many there were but it must easily have been over a thousand. As well as the Isabelline Shrike, Barred Warbler, Wood Warbler and at least 1 Lesser Whitethroat, there were also c4 Blackcaps and a Garden Warbler on the island today plus 2 Pink-footed Geese and a single Brent at Eoligarry and 14 Whooper Swans on Loch Tangasdale. 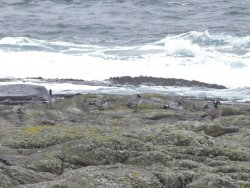