The write up for the American Redstart from @Bruce

American Redstart on Barra: 7th-17th September 2017​
First record for the Outer Hebrides​
Over the years the Isle of Barra has earned a reputation as something of a rarity magnet. The Yellow Warbler got the ball rolling back in 2004 and was followed by a Rose-breasted Grosbeak, a couple of Red-eyed Vireos, Hermit, Swainson’s and two Grey-cheeked Thrushes, Ovenbird, Scotland’s first live Cetti’s Warbler and in September 2016, Britain’s first Eastern Kingbird. In June 2017 I was fortunate enough to find a White-throated Needletail here, but the reality of Barra birding is that most of the time there are no rarities and birding the island day in day out throughout the year can be a hard slog.

I optimistically like to think that the autumn begins in July, so I’d been flogging the island’s beaches, machair and plantations since then, hoping to find migrants. But apart from a Pectoral Sandpiper that dropped out of the sky and spent five minutes feeding in front of us on Vatersay in mid-August, we’d seen very little to get excited about.

September 7th was another day of frequent heavy showers and strong westerly winds. As ever Kathy and I were out early, searching Vatersay and the western side of Barra for American waders and failing to find any. After doing some chores in the middle of the day, I set out again in the late afternoon to check the north end of the island, while Kathy stayed home. After scanning through the waders at the airport, I headed up to Eoligarry. Parking by the cemetery, I checked the garden that the previous autumn held the Kingbird but today held a small flock of Starlings and a single Blackbird. I’d walked miles in the rain during the morning. My waterproofs weren’t waterproof anymore, I was feeling exhausted and I could see another wall of rain approaching from the west. I was tempted to call it a day and go home, but convinced myself that I couldn’t get any wetter than I already was, and today might be the day there was an American Redstart or Bay-breasted Warbler in the trees just along the road, so I ought to go and check.

Behind the church at Eoligarry there are 5 sycamore trees and a small patch of brambles, all sheltered from the elements by a wall. This site has always felt promising and although the best birds I’d seen during hundreds of visits were a couple of Barred Warblers and a Red-backed Shrike, I knew that one day it would hold something much rarer. As I approached the first tree, a small bird took off from behind a clump of ragwort just a few feet in front of me. I’m not sure that I even raised my bins, but I certainly clocked the bright yellow panels on the base of its tail as it flew away from me. For a split second the tail pattern made me think it was a Greenfinch, but the bird was too small and the wrong shape. Siskin didn’t fit either. I could only think of one species with such a striking tail pattern and it wasn’t European. It landed on a bare section of branch about 15 metres ahead and a quick look at it through my bins revealed a small warbler type bird sitting in a Red-breasted Flycatcher-like pose with tail cocked, with a pale grey head, clean pale belly with yellowy-orange patches on either side of the breast, a faint wing bar and hi-vis yellow panels on the base of the tail. I grabbed a quick record shot while it sat motionless on the branch for a few moments and then it flicked out of sight. I’d seen enough to realise I’d found Britain’s 6th and Scotland’s 2nd American Redstart: a species I’ve had a thing about since missing the chance to see one in my teens in Cornwall in the early ’80s, a species I’ve spent many a winter’s evening gazing at in field guides and on Youtube, dreaming of finding one. I had to check my single record shot on the camera a couple of times just to make sure I hadn’t imagined the whole thing!

I tried calling Kathy but the phone network was down again. Certain that the bird wouldn’t leave the cover of its isolated trees, I ran back up the road to the car, giving a khaki-clad, binocular-wearing tourist a funny turn as I ran up to him thinking he was a birder, yelling breathlessly, ‘American Redstart…trees!’ before driving off at high speed. Kathy and I were soon back at the churchyard getting great views of the American Redstart as it flicked in and out of the trees, feeding actively. During the brighter moments it even sat out on top of the brambles sunning itself. We returned home in the early evening and released the news. A wet night followed, ensuring that the bird was still present the next day as the first twitchers arrived.

The American Redstart was considered to be a first winter female and probably arrived here on a weather system that left Newfoundland less than 48 hours previously and passed over the Hebrides at lunchtime on 7th. It remained at Eoligarry for 11 days, finally departing overnight on 17th/18th September on the second calm, clear night of its stay. During this time over 200 birders came to Barra to see it, making this the island’s biggest twitch to date. Since there had been no opportunity in over 30 years to see this bird in Britain, for many it was too good a chance to pass up. 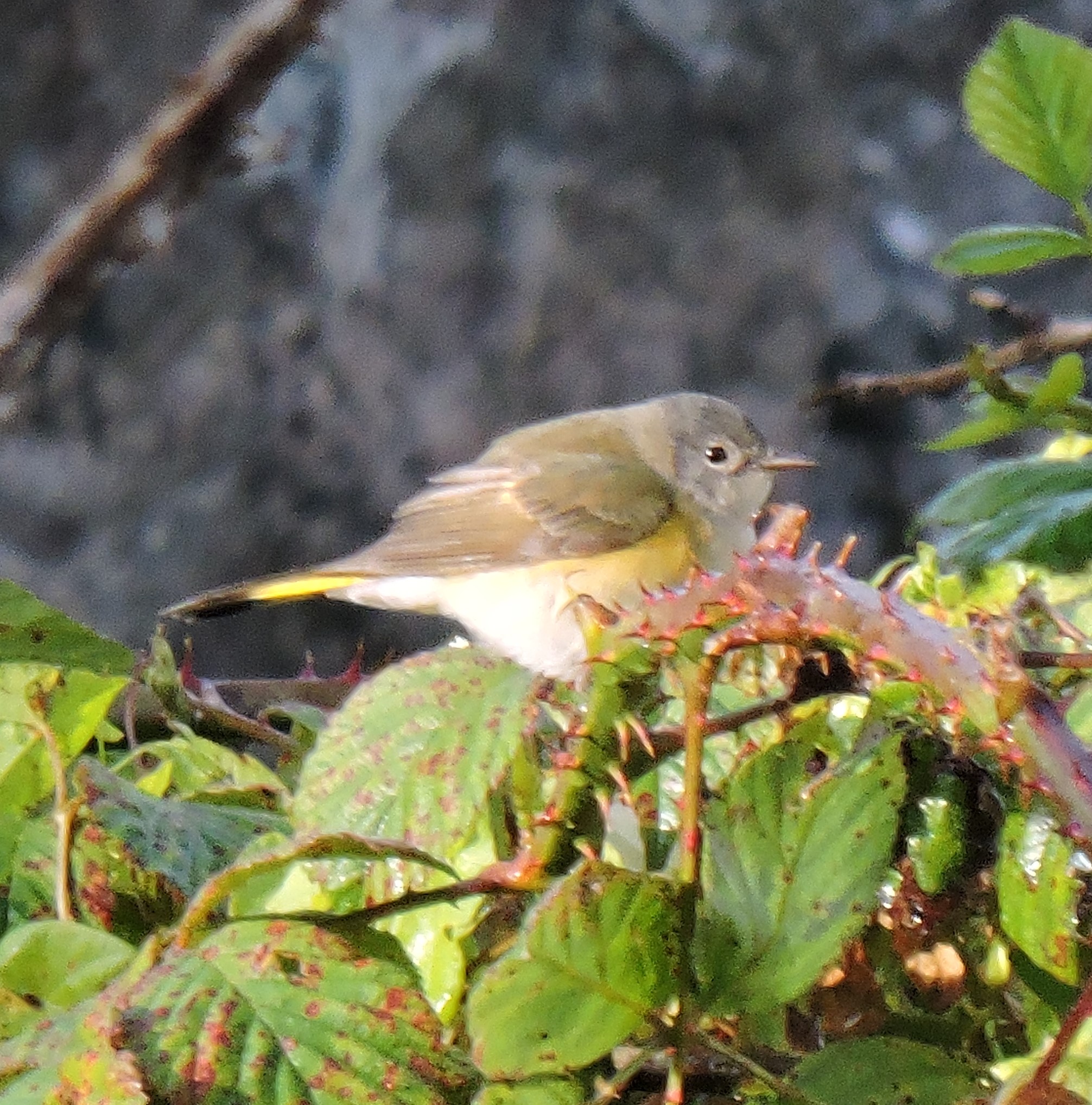 American Redstart (c) Bruce Taylor, photographed on the day he found it.