I was on my own and spending the morning surveying Howbeg to Bornish for the annual winter goose count, taking in all the side roads. I headed down to the Ard Michael cemetery and couldn’t resist popping in to a small bay just before the cemetery – this is a regular stop-off point when I am in that location.

It was fairly quiet apart from a couple of Herring Gulls and a Common Gull loafing on the rocks and 5 Turnstone’s in amongst the seaweed. I spotted another bird, a couple of hundred yards away, on the water about 12 feet from the shore, feeding by picking items from the water. At first glance I thought Black-headed Gull but as BH Gulls are usually in short supply over the winter here, and because it was on it’s own I looked more closely and saw that it had a black bill – I immediately thought Bonaparte’s. It was easily aged as a first winter bird by the unmoulted wing feathers. These unmoulted feathers looked darker than than you would find on a Black-headed Gull. I have seen this species frequently in Canada where I have spent up to 6 months at a time running bird observatories and carrying out daily bird censuses.

I was unable to contact Andrew who I know had previously found this species in 2004 and lives fairly nearby, he was up in the hills doing some raptor survey work. I waited for a while to see if the gull would fly or come ashore so that I could see it’s leg colour but it didn’t and as I only had a certain amount of time to complete the goose count I took a photograph and returned to the survey. 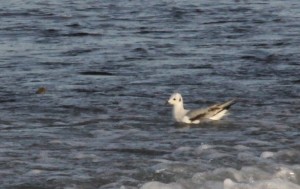