Our oldest House Sparrow, A39 has not been seen since 21st July. Throughout his life, he has never been absent for this length of time before and therefore sadly, he must now be presumed dead. We will probably never know his fate.

When we first arrived here at Askernish South Uist, as ringers we were looking for projects. The presence of House Sparrows, around the township meant that we could study them from home. Being a species of conservation concern made this even more appropriate and so we participated in the British Trust for Ornithology’s (BTO) Retrap of Adults for Survival (RAS) study.

A39 was one of our first to be ringed a few days after our arrival on 25th August 2010 as an adult male, although the colour ring was not added until a few weeks later. During his life which lasted 6 years 9 months 24 days, he was seen, noted and recorded on 1,187 occasions, which equates to every other day of his known life. Remarkably, all sightings were within 300 yards from where he was originally ringed, showing just how sedentary this species is once they reach adulthood.

In 2013 he survived a deadly concoction of 3 diseases, the bacterium Staphylococcus aureus, avian pox and trichomonosis, which reduced the population by 50%, from which it has still not fully recovered. Those that were affected, including A39, became very lethargic, fluffed and suffered feather loss, especially around the head making them look bald. A39 was strong enough to recover, but when his feathers re-grew, many were now white. They remained this colour throughout successive annual moults making him instantly recognisable without having to read the ring number.

As one of the first House Sparrows to be ringed, A39 was always going to be special. The fact that he survived all the rigours of life, was so instantly recognisable and lived for so long made him even more so.

Farewell A39, you will be missed. 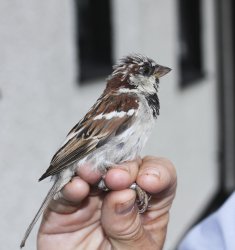 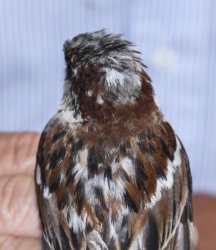 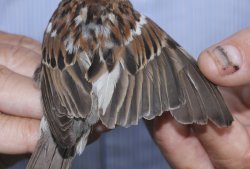 Thanks Ian - you did him proud !