Having just returned home from a months birding holiday in Texas, enduring three flights, and an arduous 30 hour return journey with constant problems and suffering during the flights with a very painful inner ear problem, we unpacked the car and made a cup of tea. Bed was the only thought in our heads. While drinking our tea in the kitchen some 30 minutes after arriving home, Ian noticed a lone small bird on the lawn outside the house. Initial thoughts were Twite from the way it was acting/feeding, but because it often pays to look closely at lone birds, Ian unpacked his binoculars.

It was not a Twite, nor Greenfinch. Siskin came to mind but almost immediately dismissed. We moved into the lounge where much closer views could be had. By this time I had managed to muster a little more enthusiasm and unpacked my binoculars and camera, taking several photographs through the window.

Upon seeing the bird at close quarters Ian identified the bird as a Serin. When looking at the bird and the photographs plus going through the identification features, I pointed out that the bill was perhaps larger and paler than the birds we were used to, and we had not seen a light nape patch and therefore it might be a Canary. With this in mind we continued to view and photograph the bird which by now, in our fatigued and jet-lagged state, fitted both descriptions and neither! The bird was small, had heavy streaking on the flanks, streaked back, neatly striated head, all pointing to Serin, and yet that bill?

Despite our tired state, Ian decided to call our neighbour, local naturalist Bill Neill. Unfortunately the telephones had been unplugged while we were away so the rechargeable batteries in the handsets were flat AND we had no mobile signal. We thought of popping across to Bill’s but on looking across to his house, noticed his car was missing and remembered that he had told us that he would be away when we returned.

We viewed the bird a little longer when, due to our state of mind and the inability to contact anyone, decided that it was someones’ escaped Canary and went to bed, leaving the bird still feeding on the lawn. It was the decision of least resistance, plus a Serin had never been recorded here in the Outer Hebrides, so what were the chances now! (haha, not one of my finest moments!)

The following day was spent playing catch-up with very little thought of the bird as it was no longer around, but late that evening, by way of a break, Ian decided to post the photographs on the local Curracag (Outer Hebrides Natural History Society) Forum under the title ID Challenge. Within the hour, we’d received an email saying “it’s a Serin!”. A bird never recorded in the Outer Hebrides before.

The photographs generated many phone calls on the 12th but the bird had not been seen since our original sighting. Later on that day, one such phone call was from John Kemp in South Glendale, some 10km to the south-east of us asking if we had seen the bird recently as he, incredibly, had a Serin in his garden! We have to assume that it is the same bird.

The bird was seen and photographed by many observers and stayed in South Glendale until at least the 21st April 2014. 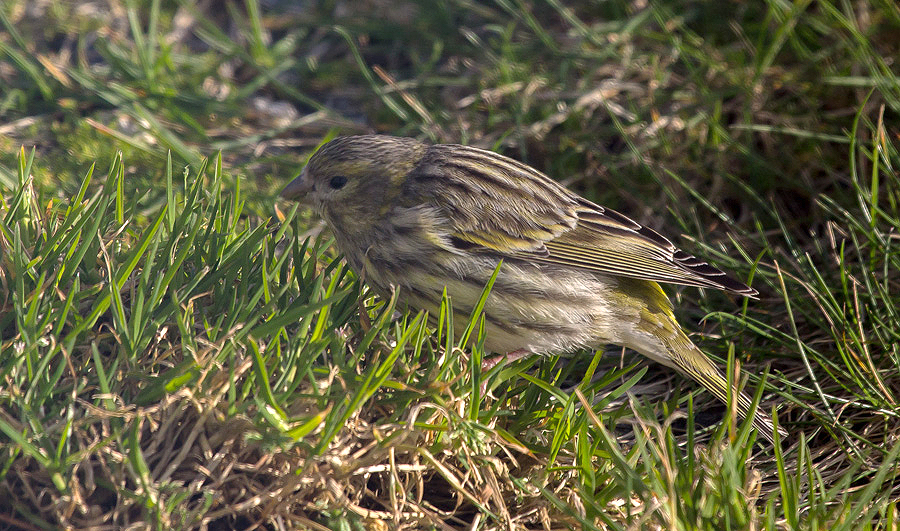