The following are some recently received colour-ring sightings and ringing recoveries.

The following two records show the continual interchange between The Outer Hebrides and Iceland:
A colour-ring Whimbrel seen at Nunton on 6th May 2015 was originally ringed as an Adult at Minna-Hof, Rangarvallar, Iceland on 2nd July 2009.
See Map
Duration: 2134 days Distance: 988 Km

A juvenile Greenfinch at Uigen, Lewis was ringed on 18th August 2016 and was subsequently controlled at Askernish, South Uist on 7th December 2016 where it has remained. See Map
Duration 111 days Distance: 117 Km

2 colour-ringed House Sparrows (L25, L98) were seen by Brian at his feeders at Carinish, North Uist, during December and into January 2017. See Map
Another (L90), was seen by John in his garden at South Glendale, South Uist during November. See Map
While the distances involved are only 37 and 11 Km, they are considered significant movements for this supposed sedentary species. As in the past, these roaming birds were all first year birds and ringed as part of an ongoing Retrap of Adults for Survival (RAS) project organised by the BTO. 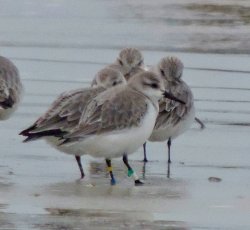 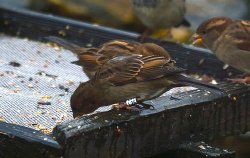