Some Recoveries and Sightings from 2016

The following are some interesting recoveries and sightings that have been taken from the recently updated Ringing and Recoveries Report published on line by the BTO. They all relate to birds encountered in The Outer Hebrides during 2016.


There are very few recoveries of Red-throated Divers, so this record is of interest as it may show a possible wintering area for birds that breed on our islands.
Red-throated Diver
Nestling - 12-Jul-13 near Carnish, Lewis
Freshly dead - 22-Jan-16 Pomphlett Creek, Plymstock, Plymouth 888km 2y 6m 10d (See Map)


This recovery of a Puffin shows how long lived these birds can be but also that all birds do not necessarily travel south for the winter
Puffin
Adult - 24-Jun-85 Garbh Eilean, Shiants
Freshly dead - 14-Feb-16 Kjollebergstranda, Farsund, Vest-Agder Norway 764km 30y 7m 21d (See Map)


The sighting of a colour ringed Common Tern in Stornoway Harbour is interesting enough when it is ringed in Dublin, but who knows where it has been in the mean time? In this case, it was controlled in Senegal a month earlier.
Common Tern
Second-year - 07-Sep-15 Sandymount Strand, South Dublin Bay, Dublin
Caught by ringer - 08-Apr-16 la Somone, Senegal 4,421km 0y 7m 1d
Colour rings seen - 10-May-16 Stornoway, Lewis 543km 0y 8m 3d (See Map) 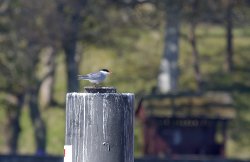