White-throated Needletail on Barra: 22nd June 2017​
Second record for the Outer Hebrides.​
Kathy and I had enjoyed a busy spring on Barra finding a few good birds including two Night Herons, a White-billed Diver, a singing Marsh Warbler and some Hebridean scarcities. Now it was mid-summer though and migration had just about ground to a halt, so we were beginning to think we’d have to wait until autumn before our next fix of rarities.

June 22nd dawned murky with low cloud shrouding the hilltops on Barra and a fresh south-south-westerly breeze was picking up. As usual Kathy and I were out birding our way around the island. We arrived at Glen just after 9am and slowly worked our way up the hill, stopping to check each garden along the way, more from habit than any expectation of finding something new. The same birds were where they had been on our previous visits and there was no sign of any new arrivals.

After checking the dump clump at the top of the hill, we began to trudge back down again. We reached the first house just after 10am, as Iain was coming out of his front door. He called over to ask if we’d seen anything interesting. I replied that no we hadn’t, in fact it was very quiet and that was the way it was likely to stay for the next few weeks, now that migration was over. The Bird Gods must have an impeccable sense of timing, as before he had a chance to reply, a large swift appeared over Iain’s roof, flying over us before looping around and heading up the hillside and out of view. It was far bigger than a Common Swift, with a barrel-like body, squarish tail, white throat and a broad white wedge across the undertail. There was only one thing it could be: White-throated Needletail. This encounter lasted around 40 seconds and prompted a mixture of disbelief, awe, blind panic and choice language from me. Although I’d seen it well, I’d not managed to get a record shot and now it had disappeared into the murk. Would anyone believe this? Probably not, especially without a photo. I started to run up the hill after it, before realising that running after the fastest bird on the planet wasn’t going to work! No, this was a time to stay calm and level-headed: the bird had flown over this spot once already and probably would again. Kathy and I kept watching and about two minutes later, to our eternal relief, the Needletail reappeared over the road a bit further down. After a quick sprint, we were treated to fabulous views as it cruised up and down the hillside, over the rooftops and along the road. I concentrated on getting record shots; this should have been easy, but my hands were shaking from a massive adrenaline rush, the light was poor and the bird was moving at break-neck speed. Eventually I got some passable shots, so was able to take it in in more detail through my bins and with the naked eye as it hurtled past us. After perhaps 15 minutes, with the weather closing in and the cloud base lowering, the Needletail switched to a new feeding circuit over and around the small copse below our vantage point. We were now able to clearly see the pale patch on its mantle and the blue sheen on its wings. What a smart looking bird!

Mobile phone reception is notoriously poor on Barra and that day it was non-existent at Glen, so knowing that we needed to get the word out, we ran back down to the car then drove home to use our landline. After phoning the news out and putting the photos on Twitter, we returned to Glen by 11.30. The Needletail was still feeding around the copse and with the pressure now off, we could finally relax and enjoy the spectacle of watching one of the best birds on the planet cruising effortlessly around us. At times it passed so close that we could hear the whir of its wings as it swept past us at point blank range, nearly taking the top off Kathy’s head on one pass!

It was still present at midday when we decided to walk back up to Iain’s house to explain what all the fuss had been about earlier, but when we returned a few minutes later, there was no sign of the Needletail. When it hadn’t reappeared after 15 minutes, we widened our search in an effort to relocate it. Sadly we failed to find it again despite the best efforts of ourselves along with Brian and Ian who had both come down from the Uists as soon as the news broke. With hindsight it’s likely that it left Barra soon after noon ahead of the approaching weather front that brought rain and high winds a few hours later. Later that afternoon, while checking Eoligarry, Kathy found her first adult Rose-coloured Starling; a small consolation for those who missed the Swift. It’s tempting to believe that this may have arrived on the same weather that brought us the Needletail. The previous afternoon there had been a strong, very warm and unusually humid south-easterly wind here and it’s therefore possible that both birds may have arrived then.

This is the second record of White-throated Needletail for the Outer Hebrides, following the ill-fated individual on Harris from 24th-26th June 2013 that famously collided with a wind turbine and probably the 9th British record overall. 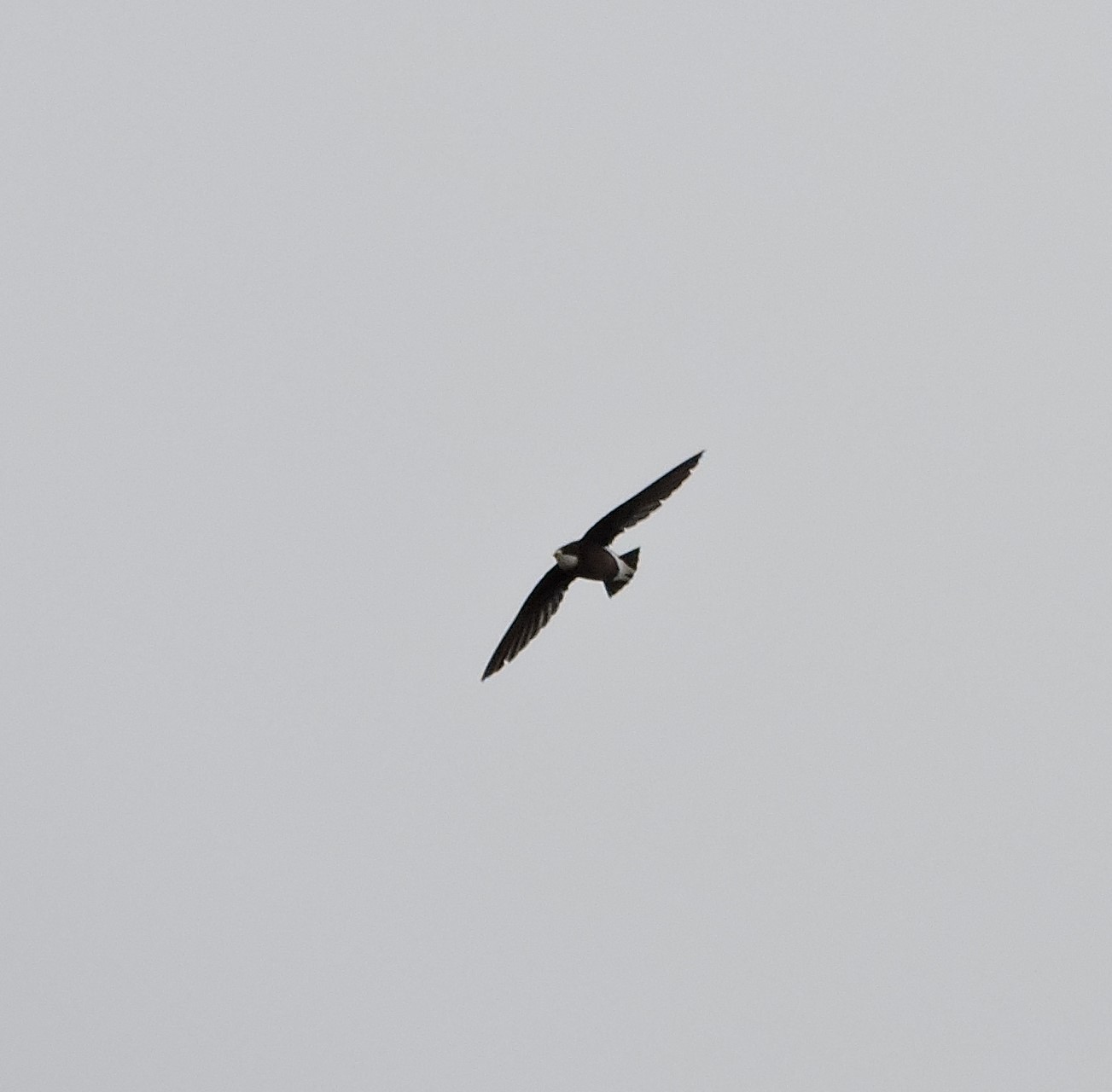