Knockaird, Isle of Lewis
A juvenile Dotterel was on the hills to the north of the township this morning. Two Lapland Buntings and two Greenland Wheatears were on the on cliff tops

Loch Ordais, Isle of Lewis
A juv ***Semipalmated Sandpiper*** there this afternoon.

Loch na Reivil, North Uist
The Pectoral Sandpiper was there again this morning.

Stoneybridge, South Uist
Six Black-tailed Godwits were on the beach this morning

Ardivachar, South Uist
Two *Buff-breasted Sandpipers* and a Lapland Bunting were on the machair to the south east Ardivachar point

Balgarva, South Uist
A *Buff-breasted Sandpiper* was on the saltmarsh and four Curlew Sandpipers and 15 Pale-bellied Brent Geese were nearby on South Ford

Eoligarry, Barra
Five ***Blue-winged Teal*** were there briefly before flying north [see @Bruce post below]
This is the largest group to be seen in Britain beating the previous high count of three seen together on South Uist in 2009.

Barra.
A visiting birder mentioned in passing that there were 5 Shoveler at Eoligarry this morning. As we've never seen a Shoveler on Barra, Kathy and I made our way to the site pronto with Ian joining us soon after. The birds were quickly located asleep in a wet field but were easily spooked and made a couple of short flights. The penny then dropped that they were actually Blue-winged Teal. As we were watching them a Pectoral Sandpiper flew in calling before settling among the Lapwing. A loud banger went off nearby causing everything to flush. The flock of BWT headed off northwards. Neither the Teal nor the Pec Sand had returned by late afternoon, but nearby there were 2 Lapland Buntings over the dunes and 4 Black-tailed Godwits on the beach. 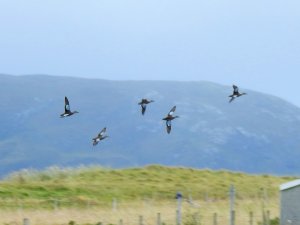 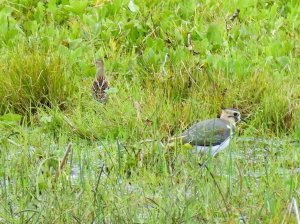