Loch Sandray, North Uist
A ***Lesser Yellowlegs*** was there this morning. Circa 70 Black-tailed Godwits were also in the area

Hirta, St Kilda
The female ***Snowy Owl*** was once agin in the village this evening. A Jack Snipe and the first Brambling and Blackbird of the autumn were also there

Askernish, South Uist
The *American Golden Plover* was again in the fields opposite the clubhouse

Manish, Isle of Harris
A Little Egret has been at Ob Leasaid for the past two days 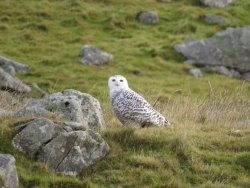 Here at Askernish, the American Golden Plover was again by the clubhouse and 15+ Barnacle Geese flew south mid morning. 2 Swallows were around the township early afternoon

News from Tony Marr at Ness

There was a small but significant overnight fall and arrival of birds throughout today. Species such as Fieldfares, Bramblings and Pied Flycatcher suggest an eastern origin.

Port of Ness (pm)
Arctic Tern – a juv. off Port of Ness
Barn Swallow – one
Goldcrest – one in gardens
Willow Warbler – one
Blackcap – one male and one female
Yellow-browed Warbler – one
Pied Flycatcher – one
You must log in or register to reply here.
Share: Facebook Twitter Reddit Pinterest Tumblr WhatsApp Email Link