Langass, North Uist
A Yellow-browed Warbler was there again today

The Range, South Uist
2 **White-rumped sandpipers** were seen on the seaweed pools opposite The Range safety boat house/sentry box late afternoon and another on the pools by Launch area 2 late afternoon [see post below]

Lochboisedale, South Uist
The Rose-coloured Starling is still visiting a garden there

Loch na Doirlinn, Barra
The juvenile *Ring-necked Duck* was again on the loch

Castlebay, Barra
A Bonxie, 4 Pomarine Skuas (one pale adult and 3 juvs) and 6 Storm Petrels were seen from the Castlebay - Oban ferry 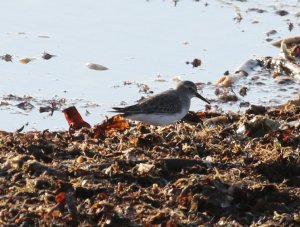 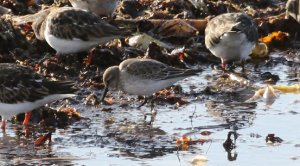 A poor WeBS count with vast amounts of seaweed. Only turnstones exceeded 100 and difficult to see so probably a lot more.
Launch area two had a tight roosting flock of 460 golden plovers (about half of yesterday's count).
B

Not much time was spent seawatching at Aird an Runair, North Uist this morning. Apart from a couple of small flocks of Barnacle Geese and a flock of seven Tufted Ducks/Scaup (passed at some distance) little else was seen. Visibility was better than the previous day with St Kilda discernible. A White-tailed Eagle came over again and a ♂ Pintail and Snow Bunting were still present.

Also a Long-tailed Duck was still present on nearby Loch na Reivil, Hougharry,

As I was leaving the NR a flock of some Barnacle Geese flew towards Loch Paible. I decided to carry out a WeBS count here and on looking from the car at the road end could see at least 1,000 present on the exposed bed. On using my 'scope I soon came across the individual with a white head and neck that has been returning for a number of years. At the other end of the flock were two Canada Goose types; I later approached closer but was unable to obtain any worthwhile photos to aid identification. It is possible that these two were also returning (first recorded in early November 2018) and subsequently identified I believe as one of the North American races of Canada and a Cackling Goose.

Apart from the skein of Barnacle Geese SE over Carinish, a herd of 33 Whooper Swans passed in the same direction 10 minutes or so earlier.
Last edited: Oct 12, 2019