Brevig, Barra
A female/2CY male *Golden Oriole* was there this morning

Leurbost, Isle of Lewis
An Osprey flew south this morning

A Ruff was still present at Loch Sandary, North Uist today while at Scolpaig two Red-necked Phalaropes flew S calling quite high up and a Whitethroat was present briefly in the gorse bushes.
B

After doing our usual early morning circuit around Brevig and Creachan, Kathy and I were heading off in the car to check Glen and Castlebay. About 200 m from our house, I noticed something bright perched on the side of a willow in the 'Hermit Clump'. Reversing back, we realised it was a Golden Oriole, less than 10m from the car. I couldn't get my camera out quickly enough as it flew up the hillside and out of view. We spent the next 40 minutes trying to relocate it and were on the verge of giving up when it reappeared back in its original spot. I managed to get a very distant record shot from my back garden. After a further 10 minutes it flew to the a garden at the end of Brevig, but despite a thorough search wasn't seen again.
There was another female Hawfinch at Ardmhor later in the morning; my 3rd on Barra so far this spring and my 16th over the past 3 years. Also today at least 3 Spotted Flycatchers around the island, the Purple Heron was still at Loch an Ali and the Great Tit was back at Creachan. 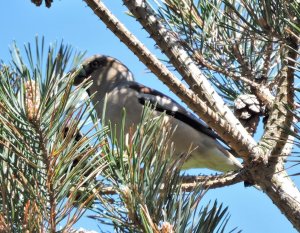 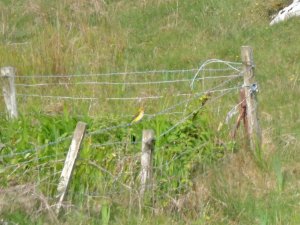