Stornoway, Lewis
A Pink-footed Goose was at Sand Street today

Sound of Taransay, Isle of Harris
3 drake Surf Scoters, circa 320 Common Scoters and 36+ Slavonian Grebes were there today

Sound of Harris:
A 1CY Surf Scoter, 45 Great Northern Divers and 19 Red-throated Divers were seen from the ferry this afternoon.

Loch Bhrusda, Berneray
22 Snow Buntings and a Pink-footed Goose were there and another 85 Snow Buntings were nearby on the machair at Borve

Langass Wood, North Uist
A *Rough-legged Buzzard* was reported as being present today

Loch SandaryNorth Uist.
The Cackling Goose and Canada Goose and the drake *Green-winged Teal* were there today.

Barra
*White-billed Diver* and a Little Auk were seen in the north of the island today. 5 Snow Buntings were also in the area. [see Bruce's post below]
B

With todays relatively calm, flat conditions on Barra, I decided to have a scan from the ferry terminal at Ardmhor. Almost the first bird I saw was a White-billed Diver sat on the sea roughly a mile to the north. It remained visible for about 15 minutes before it started diving. We eventually lost it drifting northwards towards Eoligarry. 2 Slavonian Grebes were also visible from here. We couldn't refind it from Eoligarry jetty although there was a lot of glare on the water. There were however 5 Snow Buntings on the beach, a Pink-footed Goose with the Greylags on the machair and a Little Auk and c260 Barnacle Geese in the bay towards Scurrival. There were 2 more Pink-footed Geese and 26 Whooper Swans on Loch Tangasdale.

I finally managed to get close views of the colour-ringed Curlew that's been around Borve since late October. This bird was ringed as a chick on Birsay, Orkney on 2nd July' 17. Apparently this particular scheme has been running for 6 years, but this is the first time a ringed bird from it has been seen away from Orkney. 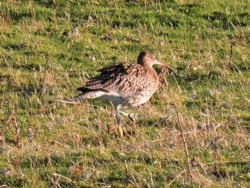 It was very quiet bird-wise when walking around North Locheynort this moring but there were 6 Brambling in amongst the Chaffinch and a Goldcrest in the pine plantation. 2 Little Egrets were at Howmore and the Chiffchaff and a Goldcrest were at Askernish this afternoon 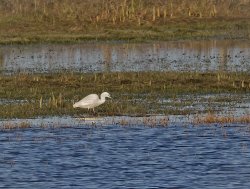 Two Snow Buntings were with at least 250 Twite at Aird an Runair, North Uist in the late morning. Offshore eight Great Northern Divers were together while a lone bird was unusually vocal for the time of year. 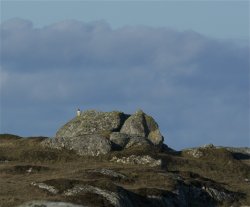